Q. What is Uterine Fibroid Embolization? 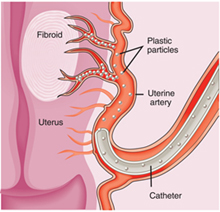 A. Uterine Fibroid Embolization (UFE) is a procedure used to shrink and ultimately eliminate the symptoms many women experience from fibroids. Fibroids are benign (non-cancerous) tumors that develop in the muscular wall of the uterus. While fibroids  do not always cause symptoms, their size and location can often cause women to  experience heavy menstrual bleeding, pelvic pain and pressure, pain in the back or legs,  pain during sexual intercourse, bladder pressure leading to a constant urge to urinate, or an  abnormally enlarged abdomen.

UFE is a minimally invasive procedure that relieves the symptoms caused by fibroids in 97%
of the patients. Although there are other accepted treatments for fibroids, UFE is considered one of the least invasive procedures with generally little or no side effects to the patient.

While gynecologists are specially trained to performed hysterectomies, myomectomies and other less invasive laparoscopic and hysteroscopic surgical procedures, most of them have not been formally trained and therefore do not possess the skills necessary to perform uterine fibroid embolization.

Q. How are fibroids diagnosed?
A. Since a large majority of patients with fibroids are completely asymptomatic. The diagnosis is usually confirmed using ultrasound or less commonly MRI. In general, MRI is better than ultrasound in determining the exact size, number and location of the fibroids. It also provides information concerning the blood supply to the fibroids that ultrasound cannot provides.

Q. What are basic symptoms of fibroids?
A. Fibroid symptoms can be grouped into abnormal bleeding, pelvic pain, and those caused by mass effect by the enlarged uterus (bulk-type symptoms). Women may develop one or more of the following symptoms:
Abnormal bleeding - sub mucous and intramural fibroids can both cause menorrhagia (prolonged and/or profuse menstrual bleeding) sometimes leading to severe anemia. Gushing, or flooding, and passage of large clots can occur. In some cases there can be bleeding between periods (metrorrhagia).
Pelvic pain - typically associated with heavy menstrual flow with cramping (dysmenorrheal)
Bulk-type symptoms - those caused by individual fibroids, or the enlarged uterus, compressing adjacent structures.

Q. What are Treatment options for fibroids?
A. The most appropriate treatment for uterine fibroids depends on the severity and type of symptoms, size, number, and location of fibroids. Treatment options include:
Medications - usually tried first for patients with symptoms, especially those with abnormal bleeding.

Uterine Fibroid Embolization (UFE) - Medical therapy fails to control symptoms in up to 2/3 patients with abnormal bleeding and a higher percentage in those with bulk type symptoms. A now well established alternative to surgical therapy is uterine fibroid embolization. Using imaging guided angiographic techniques an Interventional Radiolgist blocks (embolizes) the blood supply to the fibroids which shrink, causing the symptoms to resolve. This treatment preserves the uterus and potential fertility.
MR Guided Focused Ultrasound – A new, non-invasive, outpatient procedure that uses high doses of focused ultrasound waves to destroy uterine fibroids, without affecting the other tissues around the fibroid. The procedure is conducted in an MRI scanner which helps the physician "see" inside the body to guide and continuously monitor the treatment.
It is effective in single fibroid and depends on location of fibroid.

Q. Is uterine fibroid embolization (non-surgical treatment) a safe procedure?
A. Uterine fibroid embolization has been performed safely in thousands and thousands women worldwide. While no procedure is without risk, fibroid embolization has been shown to have a lower major complication rate than traditional surgical treatment options such as myomectomy. The few potential complications are infection and ovarian failure leading to premature menopause. Infections are extremely uncommon and can usually be treated with oral or IV antibiotics. Rarely (much less than 0.5 percent), can develop and may require to undergo a hysterectomy. Ovarian failure leading to premature menopause is also relatively uncommon occurring in 1 percent of most patients who nearing menopause.

Q. What can I expect during the procedure?
A. UTE requires an overnight stay in hospital. Prior to embolization, the patient will be sedated and remain drowsy throughout the procedure. Most procedures take approximately 20-30 minutes. An Interventional Radiologist performs the UFE through a small catheter inserted into the femoral artery in the groin. A local anesthetic is used to numb the skin and no stitches are needed after the procedure.

Q. What happens to the fibroids after embolization?
A. After UFE, the fibroids shrink and die while the normal uterus and uterine tissue lives.

A. The uterine fibroid embolization procedure itself is painless. The only pain encountered by the patient is the local anesthetic shot at the puncture site near the right hip. For the pain reason, we keep patients overnight in the hospital for pain control. The morning after the procedure, the symptoms have usually improved to a point where they can be easily controlled with oral medications provided for the patient at the time of discharge to take home.

Q. How long until I can return to work after UAE?

The average recovery time before patients return to work or their normal daily activities is approximately one to three days.

Q. What type of follow-up is required after the UAE procedure?
A. After the procedure, we ask you to return to our office for routine follow-up in seven to 10 days. We also ask that you schedule an appointment to see your gynecologist in two to three months after the procedure for a routine gynecologic exam. We will plan for follow-up MRI in six to nine months to assess the results of embolization and to insure that the blood supply to the fibroids is eliminated.

Q. How expensive is UAE?

A. While it varies significantly from hospital to hospital, in general, uterine fibroid embolization is less expensive to hysterectomy and myomectomy. In many areas, it is reported to be less expensive due to the shorter hospital stay and no need for general anesthesia.

Q. How successful is UAE in controlling symptoms caused by fibroids?