What is uterine / uterus fibroid ?

Uterine fibroids (myomas, leiomyomas, or fibromyomas) are the most frequent tumors of the female genital tract: 20 to 40% of women of childbearing age have a fibroid. Fibroids range in size from very tiny to the size of an orange or larger. In some cases, they can cause the uterus to grow to the size of a five-month pregnancy or more. Fibroid may be located in various parts of the uterus.
Fibroids affect at least 20% of all women sometime during their life. Women aged between 30 and 50 are most likely to develop fibroids. Overweight and obese women are at significantly higher risk of developing fibroids, compared to women of normal weight. 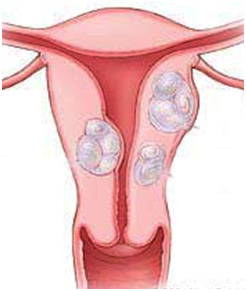 1) Intramural fibroids are located within the wall of the uterus and are the most common type; unless large, they may be asymptomatic. It may cause heavy bleeding with clots. With time, intramural fibroids may expand inwards, causing distortion and elongation of the uterine cavity. 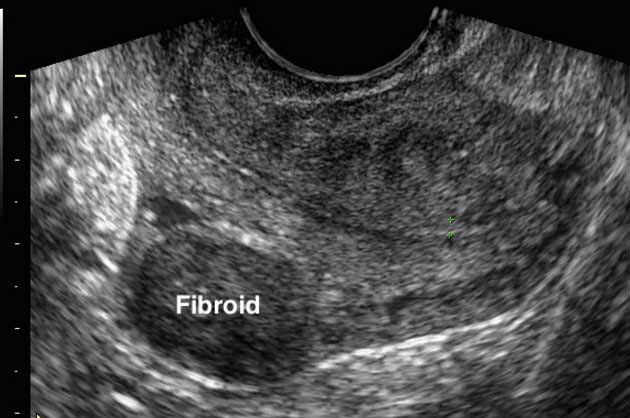 2) Subserosal fibroids are located on surface of the uterus and can become very large. They can cause pressure over adjacent structures like bladder and rectum producing urgent urination and constipation with back pain.

3) Submucosal fibroids are located in the muscle beneath the endometrium of the uterus and distort the uterine cavity; even small lesion in this location may lead to excessive bleeding and infertility. 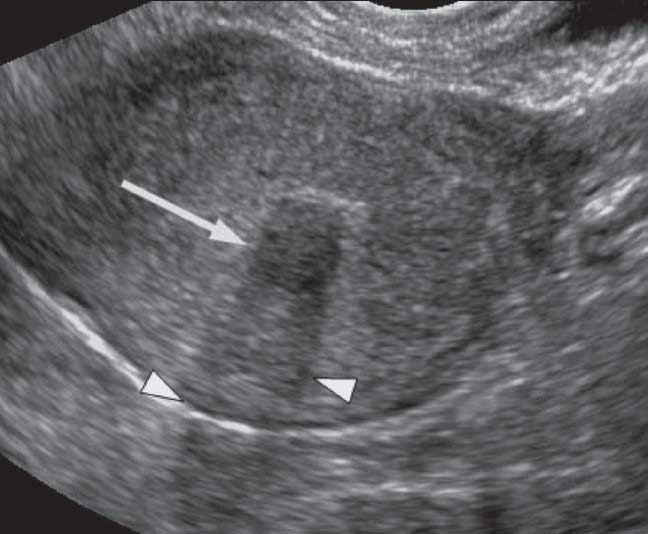 4) Cervical fibroids are located in the wall of the cervix (neck of the uterus). They may block/narrow the passage causing difficulty in delivery. 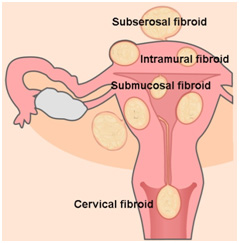 Symptoms of fibroid - depending on location, they may cause any of these symptoms: 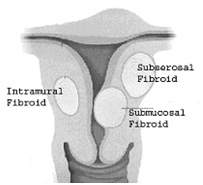 Fibroids are usually diagnosed during a gynecologic examination. The presence of fibroids is most often confirmed by a lower abdomen or transvaginal ultrasound. Fibroids can also be confirmed using MRI (magnetic resonance imaging). These imaging techniques serve as a baseline examination for follow-up after uterine fibroid embolization (UFE).

Doctors don't know the cause of uterine fibroids, but research and clinical experience point to these factors:
Genetic alterations: - Many fibroids contain alterations in genes that are different from those in normal uterine muscle cells.
Hormones: - Estrogen and progesterone, two hormones that stimulate development of the uterine lining during each menstrual cycle in preparation for pregnancy, appear to promote the growth of fibroids. Fibroids contain more estrogen and progesterone receptors than do normal uterine muscle cells.
Other chemicals: - Substances that help the body maintain tissues, such as insulin-like growth factor, may affect fibroid growth.

Although uterine fibroids aren't dangerous, they can cause discomfort and may lead to complications such as anemia from heavy blood loss.
Anemia: - if the bleeding is very heavy.
Urinary tract infections: - if pressure from the fibroid prevents the bladder from fully emptying
Pregnancy and fibroids: - Fibroids usually don't interfere with conception and pregnancy. However, it's possible that fibroids could distort or block your fallopian tubes, or interfere with the passage of sperm from your cervix to your fallopian tubes. In other cases, treatment for fibroids during pregnancy isn't necessary. A common complication of fibroids during pregnancy is localized pain, typically between the first and second trimesters. This is usually easily treated with pain relievers. But if you have fibroids and you've experienced repeated pregnancy losses, if no other cause of miscarriage has been found and if your fibroids distort the shape of your uterine cavity, then fibroids may be the cause of it and needs to be treated.

It is a minimally invasive interventional radiological procedure, which means it requires only a tiny nick in the skin. It is performed under sedation and local anesthesia – feeling no pain and usually requires a hospital stay of one night. Many women resume light activities with in a day or two and the majority of women are able to return to normal activities in less then a week. 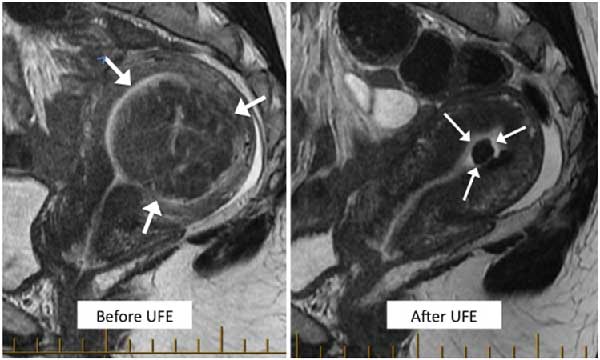 UFE treats all uterine fibroids at the same time and is, therefore, extremely effective.
The interventional Radiologist makes a small nick in the skin (less the ¼ of an inch) at groin, inserts a catheter, identifies uterine artery by using angiography with contrast media injection and then inject embolization particles (polyvinyl alcohol) that block the tiny vessels supplying all the fibroids. This blockade of blood supply to fibroids causes infarction (loss of blood supply to the fibroids) and subsequent degeneration of the fibroids. It starts reducing in size reaching half the size in few weeks. Symptoms due to the fibroids (like bleeding and pain) resolve in 85% to 95% of patients with in a short time.

A. Embolization preparation. A tiny angiographic catheter is inserted through a nick in the skin in to an artery and advanced into fibroids.
B. Injection. Tiny polyvinyl alcohol particles of 500 um in diameter are wedge in the small arteries, blocking the blood flow to the fibroids.

While embolization to treat uterine fibroids has been performed since 1995, embolization of the uterine artery is not new. It has been used successfully by interventional radiologist for over 20 years to treat heavy bleeding after childbirth (PPH).

Uterine Artery Embolization is useful in many conditions:-

Focused ultrasound surgery: - MRI-guided focused ultrasound surgery (FUS) is a noninvasive treatment option for uterine fibroids that preserves your uterus. This procedure is performed while you're inside of a specially crafted MRI scanner that allows doctors to visualize your anatomy, and then locate and destroy (ablate) fibroids inside your uterus without making an incision. Focused high-frequency, high-energy sound waves are used to target and destroy the fibroids. One or two treatment sessions are done in an on and off fashion, sometimes spanning several hours.
Because it's a newer technology, researchers are learning more about the long-term safety and effectiveness of FUS. Research continues, but so far data collected show that FUS for uterine fibroids is safe and very effective.